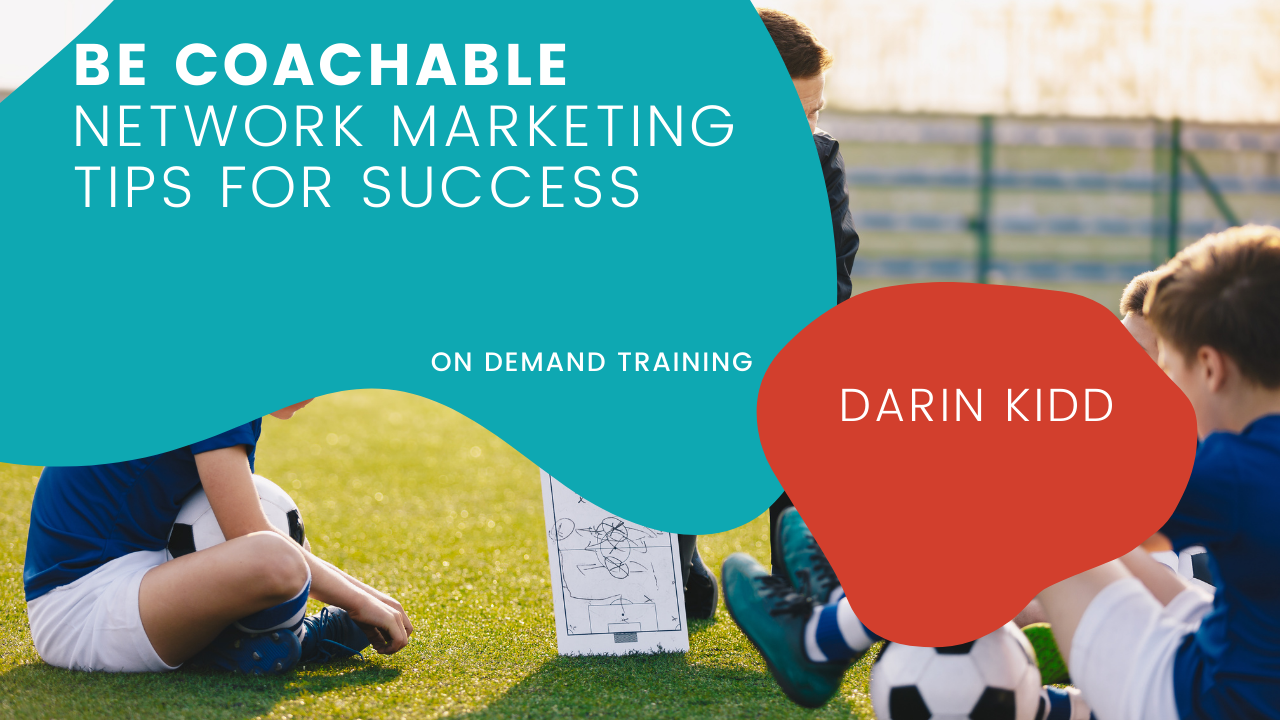 In this video I share how to be coachable and why this is my #1 tip to network marketers. Being teachable allows you more room to grow and learn. Being coachable is the first of my mlm keys.

Read the Full Transcript Below

Number 1 you have to be coachable or teachable. What does that mean? Well most people say “I am coachable”. What they really mean is: as long as you are telling me what I like to hear and it doesn’t make me uncomfortable, I am coachable.

What Does it Mean to Be Coachable?

What I have found from my experience in the industry if it rubs me the wrong way, most of the time it was meant for me. Because if I keep doing the same things I am going to keep getting the same things. The definition of insanity is doing what we have always done and expecting things to change.

If we buy a McDonald’s franchise, okay thirty thousand plus McDonalds, we don’t say “listen I don’t want the cheeseburger in the yellow wrapper, I don’t want the fry machine on the left side and the shake machine on the right side, I want to change up the recipes”. No. We are going to do exactly what they say at hamburger university because that is the system.

So the great thing about networking marketing companies is that they have systems in place that allow average people to make way above average income. So the key is being coachable and teachable and sparing us your brilliance for the first 6 -12 months and just doing what they company says, because everything that the company tells you to do should be simple, duplicatable, that our children can actually do it.

Okay, because everything we do in this industry basics create wealth not the fancy stuff. Basics duplicate, fancy does not. So everything that we do in the system when we are coachable and teachable that they are going to share with us should be able to be duplicated 5, 10 levels deep, 20 states, multiple provinces away, multiple countries away. A dud can do it to a stud or a studette.

So make sure that you are coachable and teachable and leave your background out of it. And that is definitely going to be a key part of your success in your network marketing company.

Darin Kidd is one of the most sought-after trainers in Network Marketing today. Having been in the industry for over 24 years, Darin has earned millions of dollars and built sales organizations with over a hundred thousand distributors. As an accomplished trainer and mentor, he successfully led hundreds of live events around the world assisting people in building their own successful network marketing businesses. While success has followed Darin in the industry, it’s not what separates him. What separates him is his passion for helping people see success of their own by teaching them to do exactly what he has done. Succeed.

Darin’s philosophy on life revolves around Faith, Family, then Finance. He enjoys spending time with his wife and five children when he is not focused on work.