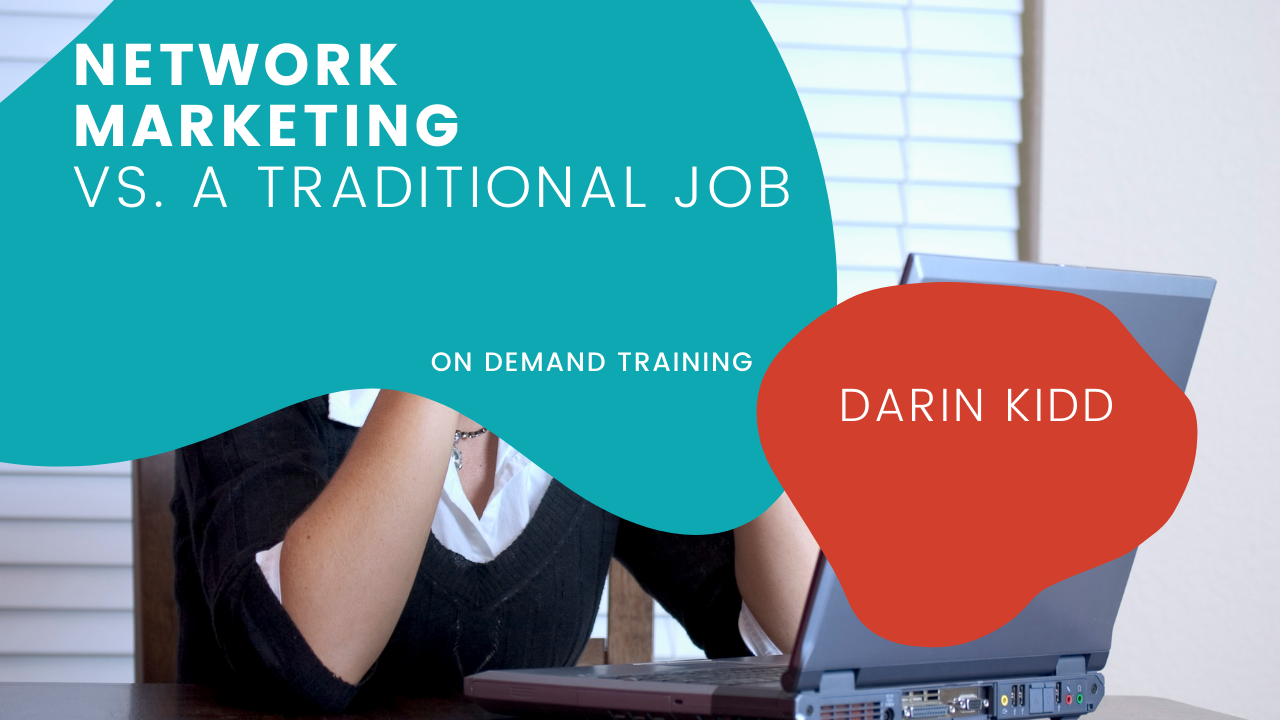 Have you ever wondered what the differences are between a traditional business vs network marketing? In this video I will talk about 3 of the biggest differences as well as what they mean to you.

I have been on both sides of the fence. I’ve had jobs, been part of franchising, and then a multiple 7 figure earner in the Network Marketing Business. It wasn’t always like that, but I had the right mentors come into my life and teach me what to do. This changed everything and led me where I am today.

Network marketing is a type of direct sales where you sell products directly to consumers. The main difference between direct selling and network marketing is that the latter requires you to recruit other independent contractors who then sell the product for you. This means that you need to build a team of people who are willing to work together to achieve a common goal.

Differences between job and network marketing

At a typical job, your income depends on you, while in network marketing you build assets that can make you money on its own!

A job uses up your time in exchange for getting you money, network marketing however, gives you more time and money.

Network marketing is for those that don’t want to work their life around their job anymore.

Let me help you shave years off of your learning curve with the difference of a network marketing vs traditional business with these tips!

Hey everyone, this is Darin Kidd. Have you ever wondered the difference between network marketing and a traditional job? Today I’m going to talk about three of the big differences, and what it means to you, coming up.

Hey everybody, this is Darin Kidd. On today’s video, we’re going to talk about three differences between network marketing versus a traditional job. I believe that I can speak on this topic because I’ve been on both sides of the fence. I actually had jobs, I’ve been a part of franchising, and I am now a multiple seven figure earner in the network marketing industry. However, it wasn’t always like that. I failed for seven solid years in this industry. I actually ended up bankrupt with my car repossessed, on government assistance. Then finally had the right mentors that taught me exactly what to do that changed everything that led me to the multiple seven figure income. With what’s happening in the world today, what I’m going to share with you is going to affect every single one of us, is affecting every single one of us, and so I’m very passionate about the topics.

Number one, at a job, your income depends just on you, and that’s scary. What if you get sick? Where, in network marketing, you have the ability to develop assets that throw off cash, that generate income whether you work or you don’t work. An example that hits home to me is my dad was one of the best in the world at what he did. He was featured in car magazines, but the day he found out he had a rare type of leukemia, and they said you only have several months to live, his income stopped that day. The last several years of his life, the number one stress and strain on my parents was money, because when you find out how much money you have can determine whether you live or die, and that’s a scary time to find that out. Definitely, that’s a key difference is your job depends just on you, where network marketing allows you to leverage your time and efforts, and not be just dependent on what you do.

Number two, at your job, you exchange time for money. Money, there’s doctors that make a lot of money, but they have no, what? They have no time freedom. Then there’s people have a whole lot of time freedom, but they have no money. Money with no time does us no good. Time with no money does us no good. In the book Rich Dad, Poor Dad, Robert Kiyosaki, one of the best-selling business authors of all times, he says, “Most people teach your kids go to school, get good grades, get a good job, and work for money. Where, wealthy people teach their children a little something different. They develop assets that throw off cash, and have money work for them.” Most people look for work, wealthy people build networks.

J Paul Getty, one of the first recorded billionaires in history of Getty Oil said, “I’d much rather get paid 1% off a hundred people’s efforts, than 100% effort of my own.” At our job, you can only work so many hours. There’s only so much overtime. Now with, I know in America, they’re starting to call us the 30 hour work week, because they’re cutting people’s hours back so they don’t have to pay them their full benefits, let alone any overtime. With network marketing, you have the ability to continually expand your income, create financial freedom, and time freedom. Which, for me, the time freedom is more important than the financial freedom, but it takes the financial freedom to get that. That’s what it’s allowed my family to be able to go out there and do, and that’s why I love this industry so much. There’s another key difference. Very similar to number one, but yet that gives you a little more depth of what I was talking about.

Number three, our job requires us to work our life around that job. Where, network marketing, you can work your business around your life. I remember one of my first jobs, my wife was pregnant and going into labor with our first child. I remember, they got frustrated when I wanted to take off work to go see my child being born. That was when I knew that I needed something different. What I love about this industry, you can build it around your life. I don’t go out to build my network marketing business most of the time. I just build it while I’m out, and that’s a big difference.

As we wrap it up, what does this mean to you? What does this mean to me? Well, there’s a publication that just recently came out. If you could see what’s on the front of this publication, I’ll read it to you. The 9:00 to 5:00 job is over. They’re now starting to call America, like I said before, the new 30 hour work week. People are getting laid off, downsized, rightsized, capsized, and they’re looking for a better way. I just heard an interview with actually Eric Worre and Richard Branson, which those who know who Richard Branson is, he’s the most influential entrepreneur in the world right now, Sir Richard Branson. Here’s what he said on this interview when talking to Eric Worre. “All the future jobs in the next 20 to 30 years will be created by network marketing,” and basically network marketers. This industry is now over a hundred years old. It’s $180 billion industry, and it’s a great time. Jim Rohn says, “Work on your job full-time, but work on your fortune part-time,” and I’ve had franchises, I’ve had jobs, and I can tell you network marketing is a better way. I hope you take this information and you act on it today.

Thanks for stopping by and checking out this video. For more video trainings just like this one, make sure to subscribe to my channel. Also, if you’re interested in getting more information on how to succeed in the new economy, I’ve put together an ebook, and you can download that for free on my website, succeedwithdarin.com/3keys. We’ll also put that in the description of the video and on the video. Thanks for stopping by. I look forward to helping you continue to grow your network marketing business, and we’ll see on the next video.

ABOUT DARIN
Darin Kidd is one of the most in demand trainers in Network Marketing today. After his vast 28 years in the industry, he has acquired a lot of knowledge. He is a multiple seven figure earner with over 1,000 personal recruits and built teams of thousands of distributors. As an accomplished trainer and mentor, he has led hundreds of live events around the world and assisted people in building their own successful network Marketing businesses. His passion is helping people see success of their own by teaching them what to do.