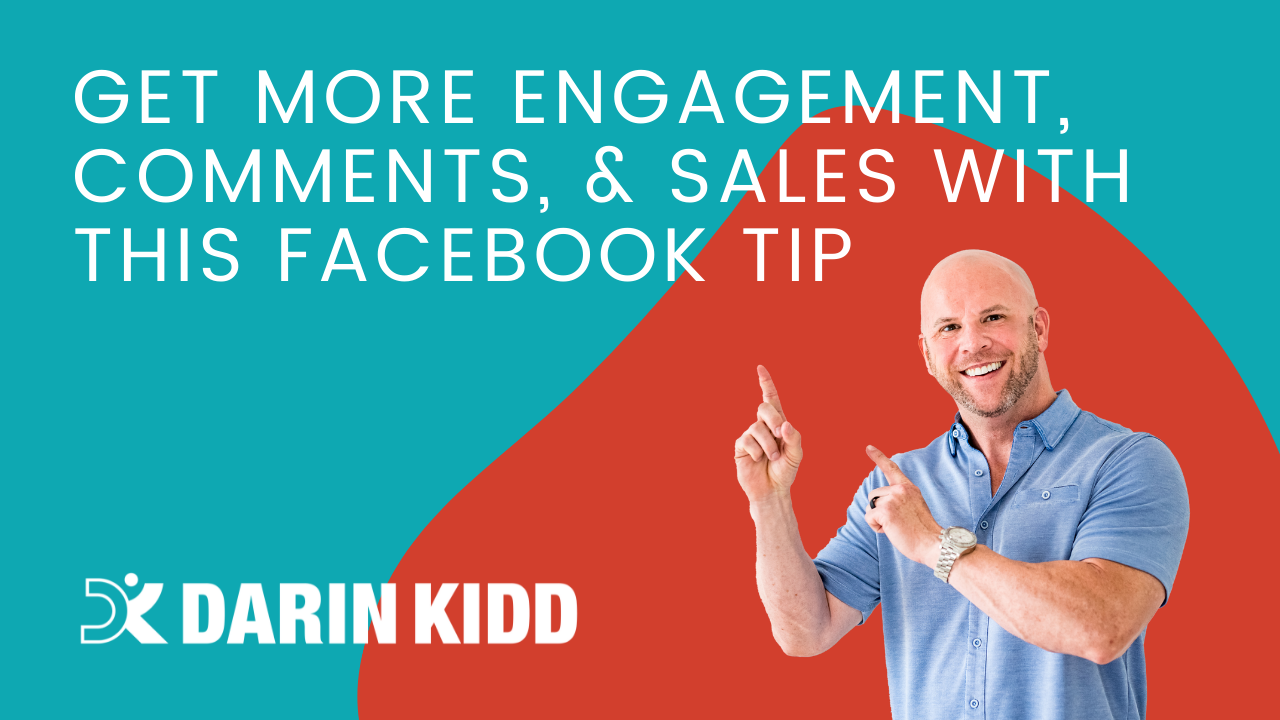 Read the Full Transcript Below:

Hey, this is Darin Kidd, I hope you’re having a great day. Listen, I appreciate you joining, and every week, my goal is to bring you tips, techniques, strategies, to help you achieve your goals building your business and get there a lot sooner than later, so if that sounds good to you, make sure that you subscribe to the platform that you’re watching this on right now, whether it’s YouTube or it’s Facebook, or it’s Periscope, because I know we still have people that are plugging in with Twitter and Periscope, and today I’m going to talk to you about a social media tip that will help you get more likes, more comments, more engagement, and then the goal is to turn that into more sales. So if that sounds good to you, we’re going to keep this brief, but I’m going to give you some things that can really help you when you’re doing your social media marketing.

And I want to share with you some from my personal experience, because today’s topic, it may be something that right off the bat you’re like, “You know what? I’m not sure if I agree with that,” and I would just encourage you to listen with an open mind, and listen to some of the things that I’ve experienced myself, and then you can make a decision, an educated decision, at the end of this training. Hey Fred, welcome, thanks for joining.

And by the way everyone, while we’re getting started, on the screen, Darinkidd.com/3keys is a download that will give you three tips to succeed in your business, okay? They’re very simple, they’re very basic, we’ve had a lot of positive feedback, and matter of fact, out of all my downloads, that’s probably the most popular, so if you have not had a chance to grab that download, make sure to go ahead and do that. Then if you have people on your team that you want to see this, or maybe you have a group, a Facebook group with an organization, you’re like, “You know what? This’ll be very helpful for that group,” make sure to go ahead and spread the love and let them know that this training is up.

How to Start Conversations on Social Media

Let’s get right into it. So when you’re posting on social media, we’re on social media for quite a few reasons, but I assume that you’re watching this because you want to know how to get more likes, engagement, comments, and then eventually turn that into sales and new reps in your business, and so the goal when you do a post, you want to drive more conversations. So many times, we’re worried about sales, worried about conversions, but that really shouldn’t be our number one goal. The goal is to how many conversations can you create, and when you’re creating the conversations and you’re doing the right things, that’s going to turn into conversions, right? As long as you’re doing the right things along the way.

And some of you are like, “Man, my company really wouldn’t like that.” It’s good for the company, and it’s good for you. I actually did both, and so that’s what I want to share with you today, my experience, and I want to give you a little different perspective, because even though I’ve shared this with some people and they choose not to actually put into action what I’m sharing with them, or put into… Implement it, then they come back to me like, “I’m not getting results.” I’m like, “Well, it’s because you’re not really doing what I taught you to do,” and here’s why.

I’ve seen companies where there’s a really smart blogger, and I was a part of one of these companies, where the information was completely fraudulent, it was a lie, but yet what this blogger did, they knew exactly how to rank in what they call SEO, search engine optimization, so every time you shared the name of your product, you shared the name of the company, people would Google it, and then the first thing they see when they Google was the name of… Was this blogger’s post, which had a bunch of lies, and it kept driving it, and the more the prospects clicked on it, the faster it drove it up to the top of the Google search. Every time a distributor joined the company, they were researching things, it would drive it to the top.

And so if you’re posting the name of the company or the name of the product, and they go to Google, one, you don’t even know you had a prospect, two, you do not control the message, and then three, you can’t follow up, and if the fortune’s in the follow-ups, you didn’t even know you had a prospect to follow up. So what I would recommend is when you’re posting about what your product does, what your business opportunity does, it’s not what it is, it’s not the features. People don’t buy the features, they buy benefits.

How to Leverage Curiosity Posts

And then what you’re doing is you’re going to say, “Listen, I’ll send you a message,” so you hit them in the DM, you don’t do it on the page, because you don’t want people seeing that conversation, and then you don’t want people seeing the name of the products or any links in the comments, and then now you’re creating a conversation in the direct message where you control what they see, you know that you need to follow up, you know the questions that they have, because if they go to Google, what is…

People know that negativity sells, so the bloggers are going to put that up, and by the way, when I was involved in that company that had that blogger, the company sued the blogger, and it took years and they won, and the person had to take the blog post down, right? But it was too late at that point, it had cost the company tens of millions, if not hundreds of millions of dollars in revenue, because that’s where everybody went to take a look. So I used to post with the company name, with the company products when I was in the field exactly like you are right now, but I’m not anymore.

And then there was a period of time where I took it all down, and then I started creating curiosity, I started sharing the benefits, not putting the name everywhere, and then I had people that were liking, commenting, asking questions, creating engagement. Then I took them to the DM, that created better conversations, it allowed me to be able to follow up and take them through the process, which ended up getting a conversion, but that wasn’t my number one goal. My number one goal was to create as many conversations as I could, because I knew if I was doing the right activities, and celebrating the right activities, how many times today was the story shared about your product, about your service, about your business model? I knew there was only a matter of time before I would have more customers, before I would have more people joining my business and being able to build the business, right?

Brand Yourself, Not the Company or Product

Let me see if that makes sense. While I’m looking at the notes, let me know if that makes sense. If you have any questions, in the comments. All right, so creating curiosity, you control the message, the fortune’s in the follow-ups, and we know it’s about exposures, conversations allow you to get exposures, and it’s about follow-ups. I saw someone recently training on the fortune’s in the follow-up. Well, that’s partly true, but it’s not just the follow-up, it’s the follow-ups. Most of the time, they’re not going to become a customer or join the business based off of one conversation, it’s going to take multiple exposures, it’s going to take multiple follow-ups, and then what I like to do, as long as you’re doing the right thing, they’re going to recruit or sell themselves when the timing is right.

Right, so anyway, I just wanted to jump on here, I didn’t want to take a whole lot of time, but here’s the social media tip once again just to overview. Make sure you’re branding you and not the company or not the products, and once the company… If the company understands why we do this, they know that it’s better for them as well, because it’s going to create more conversations throughout the entire company, because they’re going to be reaching out, you’re going to control the message, you’re going to be able to get them whatever tool that you’re using, whether it’s a video, it’s a website, maybe you’re using an app to get them the right exposure, maybe it’s a survey, I’ve seen people use many different exposures, but you’re going to control that, not Google, you’re going to know that you have a qualified prospect, and it’s not going to be like…

Because I could look at your site, and if I look at the name of your product, I Google it, I judge based off the information that I read, and you never know I was interested in what you’re doing, but if you created and piqued curiosity, shared the benefits, all of a sudden I’m like, “Wow, I would love to have freedom to work from home, I would love to have better focus, better memory, better fat loss, I love to sleep better at night,” then I’m going to reach out to you, go “Hey, where did you get that?”

You’re not selling them, they’re asking you for information, and then you have the solution to their problem, and then they know they can do exactly what you did. So if you want to start having people reach out to you on a consistent basis, start creating curiosity, implementing those tips and those strategies, and I think it will make a big difference in your business.

2021, my goal is to flood you, whether you’re in network marketing, whether you’re in real estate, mortgages, whatever, I want to give you information that’s going to help you get to where you want to be sooner than later when it comes to your business, when it comes to your health, whatever it is you want to do, I want to help you get there sooner than later. So if that sounds good to you, we’ll see you on the next training, appreciate you always, and have an awesome rest of your day, take care.

Darin’s philosophy on life revolves around Faith, Family, then Finance. He enjoys spending time with his wife and five children when he is not focused on work.